Last year, I had big plans for my birthday – I was going to head to Bistecca and order a huge hunk of steak to comfort myself over the necessity of turning yet another year older. But of course, we all knew how that panned out. Like pretty much everything last year, those plans were ruined by covid, and I didn’t end up getting my steak until about September. Thankfully, this year things are looking a lot better, and I managed to get to their sister restaurant, The Gidley, exactly on my birthday! 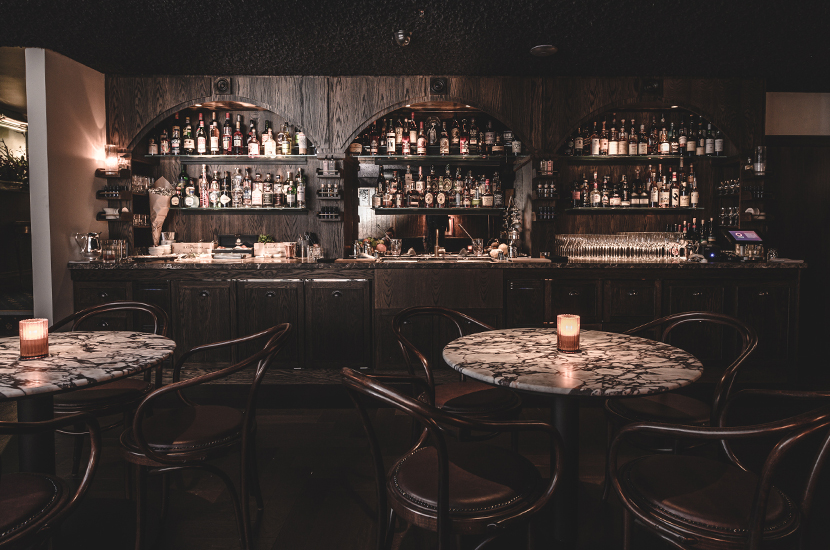 You know the phrase, ‘if you know, you know’? Well in the case of The Gidley it’s ‘if you don’t know, you don’t know’, because there’s no way of stumbling upon this place if you’re not specifically looking for it. Aside from a sign with the restaurant’s logo (no name), and a postcard-sized plaque by the door, there’s nothing to even hint at the existence of this modern take on the steakhouse. What you end up having to do is press the doorbell at the unmarked door, and a moment later, the lock clicks, and then you’re on your way down into this subterranean haven of beef. 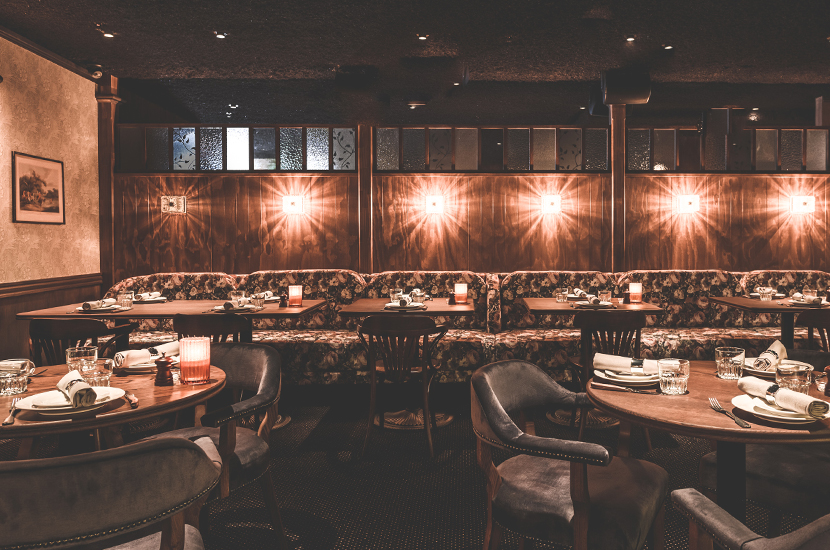 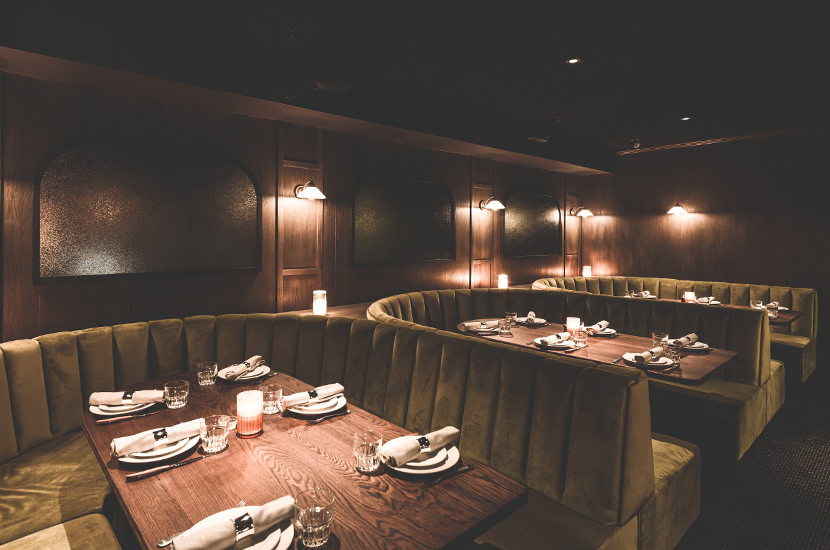 The Gidley is gorgeous, there’s no getting around the fact. Modelled after the darkly brooding soul of a vintage New York steakhouse, and softened with floral upholstery and velvet drapes, The Gidley feels as luxe as its menu. To complete (or rather, avoid disrupting) the mood, mobile phones are gently taken away and placed into leather pouches, to be returned at the end of the meal. The sting is softened a bit by the professional yet exuberant service; it is clear that all the staff are extremely proud to be working here. 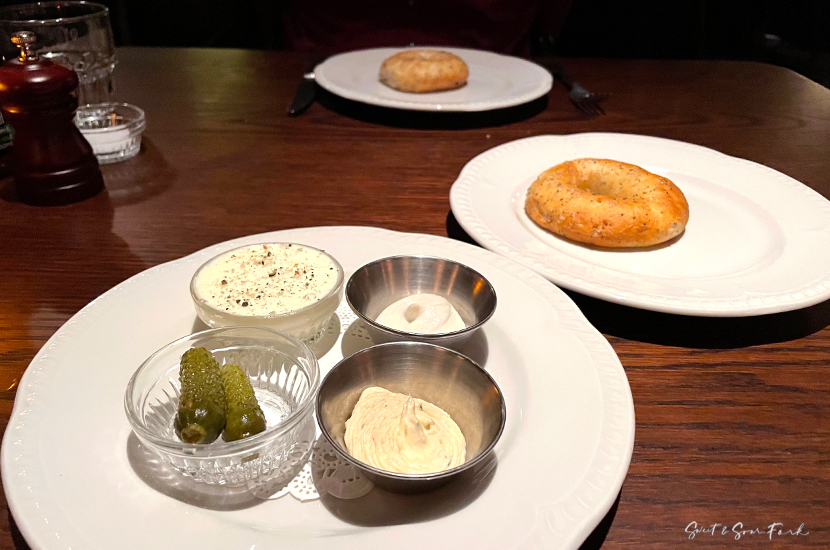 The beef fat candle at Bistecca was delightful, but I would argue that The Gidley one-ups that when it comes to complimentary carby offerings. We were served black pepper-studded bagels – hot from the oven with a crispy shell and a fluffy centre – with a selection of condiments. The whipped beef fat butter was the poster child for sure, but my favourite was actually the crème fraiche blended with salmon, dill, and feta; it was basically everything you could possible want on a bagel in spread form! But I don’t want to ignore the vegan almond butter either, which was surprisingly lush and creamy with a good hit of tanginess to cut through the richness. 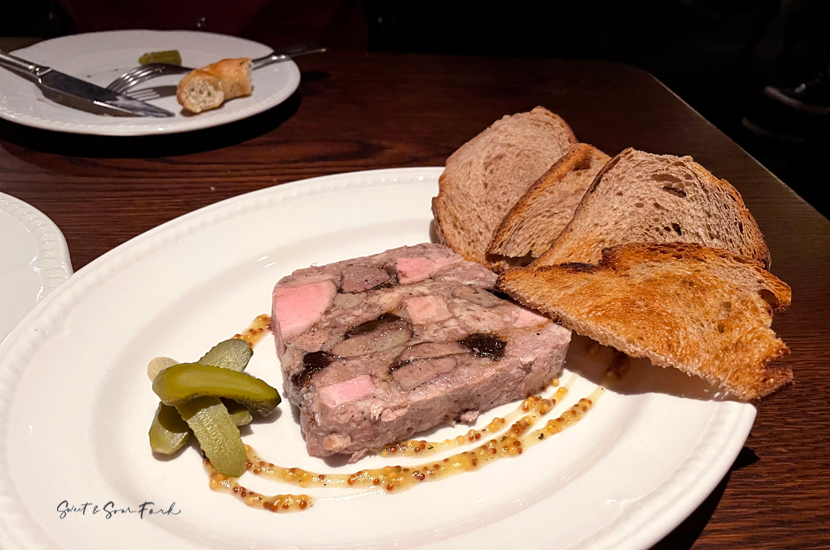 We were coaxed into getting an entrée to tide us through the half an hour it takes the steak to cook, and although we were strongly recommended the burger, I wasn’t sure about pre-loading our steak with more beef, and ended up going for the Terrine ($14) instead. Now, if you’re a fan of terrine, then this is as good as it gets. Instead of being largely made of gelatine and indistinguishable scraps, this version is studded with hearty chunks of slow-cooked pork shoulder, held together by smooth chicken liver pate, and sweetened with preserved prunes dotted through. It is also an incredibly generous serve, especially with the side of sourdough toast, yet due to the quality of the ingredients, it went down very easily indeed.

Choosing a cut of meat was a tough decision, but we were told that if there was one we had to have, it was the Spinalis ($68), which is the cap of the ribeye, and touted to be ‘arguably the most succulent cut in the world’. Charred over open flames fed with ironbark, this had an intoxicatingly smoky char, and a perfectly pink, juicy centre. It was indeed incredibly tender, to the point where we could literally just take bites out of it instead of using our steak knives. But with that said, I wasn’t as blown away by this as I had hoped to be. It neither had the robust beefiness of the T-bone served at Bistecca, nor the buttery richness of heavily marbled wagyu. It’s a great quality piece of meat cooked to perfection, but it just didn’t have any wow factor for me. 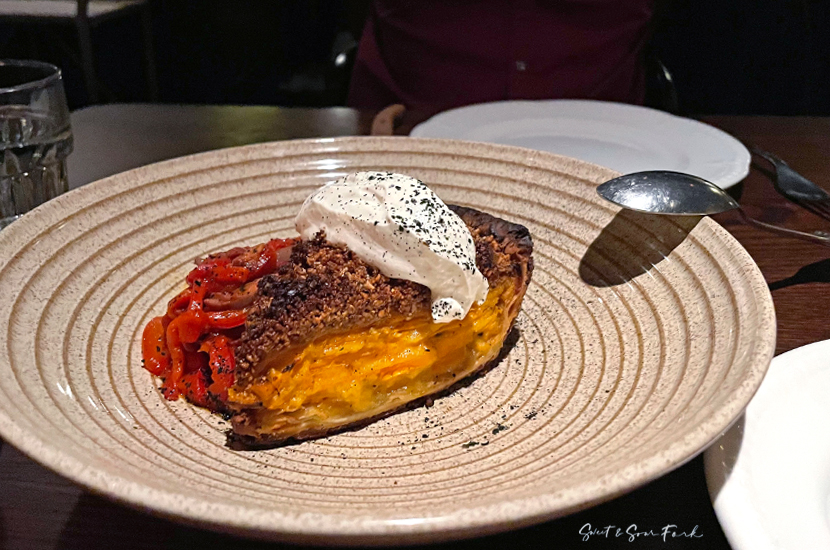 The Pumpkin Pie ($24) may seem like the obligatory vegetarian offering, but we were assured that it was far from just an olive branch to the less carnivorous. On a base of buttery pastry were paper-thin slices of pumpkin, layered and baked to a melt-in-the-mouth texture and capped with a pepita crumb. Dolloped on top was creamy whipped goat cheese, its tangy saltiness bringing out the sweetness of the pumpkin. But the real magic was in the sofrito of roasted capsicum and chopped olives, which imparted an earthy, briny quality to each bite that was so unexpected, yet worked so remarkably well. 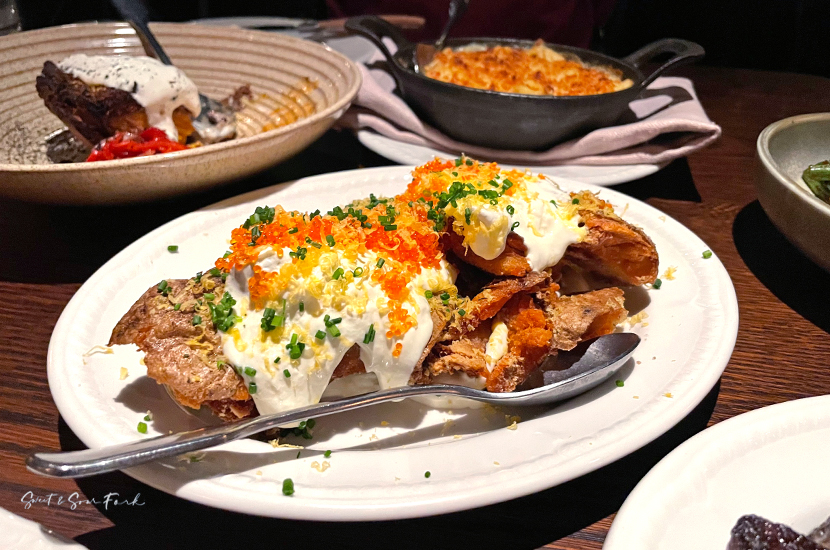 If picking the steak was hard, then picking the sides proved to be near impossible. I mean, come on – they have a dedicated potato menu! But the one thing I knew I had to have was the Roast Potatoes ($14). Because these weren’t just any old roast potatoes – these were topped with sour cream, tobiko, and smoked egg yolks. Better still, the potatoes were smashed then roasted, which yielded some earth-shatteringly crunchy edges, as well as the mandatory fluffy centres. I could honestly just eat a plate of this and call it a meal – the combination of tangy sour cream and salty cod roe on crisp potatoes is just that good. 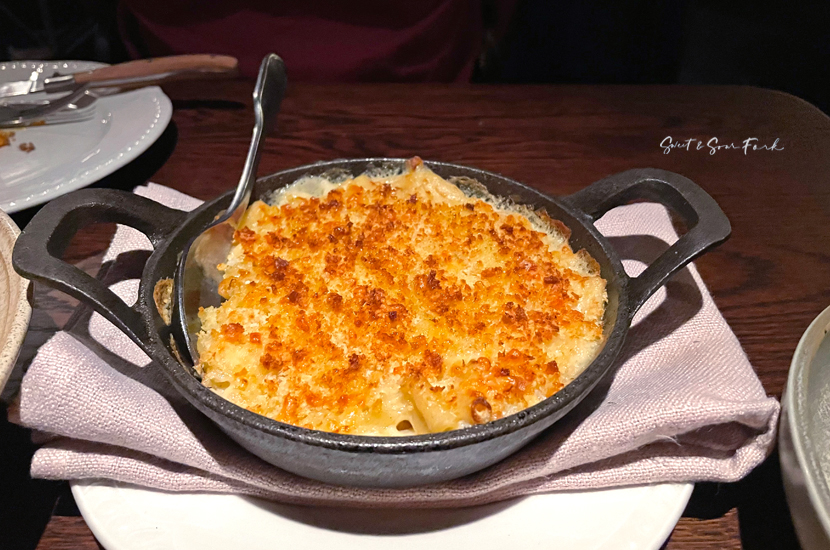 Another must-order was the Mac and Cheese ($18), which wafted over with the unmistakable aroma of truffle oil. This was just perfect – creamy and indulgent without being overly rich, and the combination of three cheeses (gruyere, cheddar, and parmesan) along with the use of truffle oil gave it a distinctly luxurious feel. 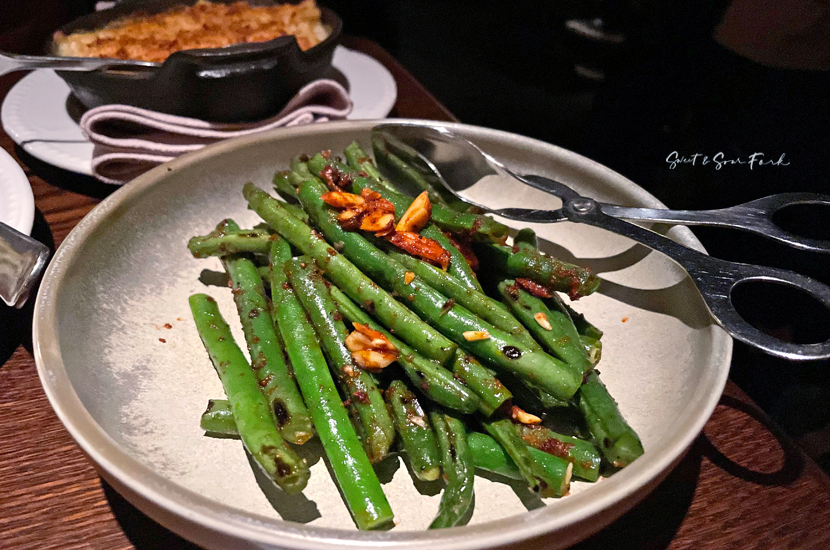 The Green Beans ($14) was our choice of obligatory greens, but they really deserve so much better than that. Sure, the beans were sweet, fresh, and cooked to crispy perfection, but it’s the combination of smoked chilli and lime that really makes them stand out. Their zestiness was a great contrast to the rest of the meal, and kept us going for far longer than we should have.

We were promised at the start of our meal that we had ordered just enough food to leave a bit of room for dessert, but we were so stuffed by this point that we couldn’t even bear to consider another bite (our waiter happily confessed to stretching the truth a little). But you know what? Despite eating myself almost to the point of sickness, it was totally worth it. The Gidley serves up very straightforward steakhouse fare, but it’s made with the best ingredients and executed with more than a little panache. As a result, you get a meal that is all deliciousness with pretty much nothing to dislike. Coupled with great service and amazing ambience, The Gidley is a luxurious and indulgent experience, and is about as enjoyable as dining gets.

Rating: 16/20 – treat yo’ self.
This rating reflects my personal experience at the time of visit. 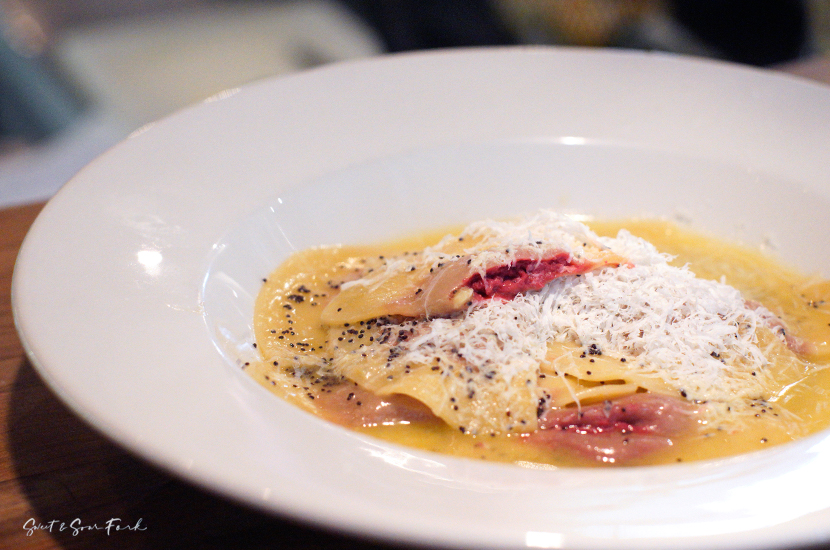 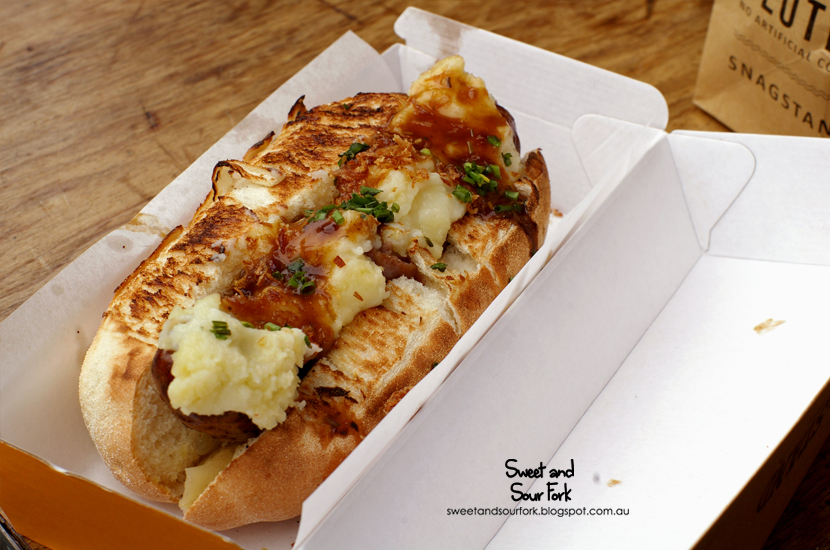